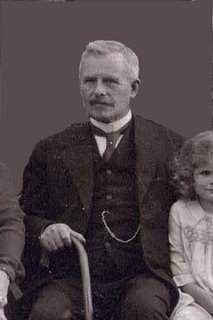 Herman de Vries Robbé was born on the 23rd of March 1863 and was the second son of Arnoldus Abraham Cornelis de Vries Robbé (1814-1881) and Adriana Martina Egeling.

Arnold was an engineer and chief of the workshops of the Holland Iron Railway Company; later Chief Engineer of the Steam Commission (Stoomwezen). In his work as inspector of steam machinery in factories he became aware of the abuses of child labour, starting a lifelong interest in combating such ills, culminating in the chair-manship of a Commission of Inquiry. The findings of the Inquiry formed the basis for control by legislation. In recognition of this work he was made a Knight in the Order of the Netherlands Lion.
They lived at Ede in a house named ‘Rozenhage’ (Rose hedge). Later generations knew this as ‘Old Rozenhage’ because his son later also gave this name to his house.

Herman attended high school in Arnhem, passing his final examinations in 1881. He lost his father the same year. His mother must have died earlier.
From a cash book he kept, it is evident that he lived in Hengelo from 1883 to 1886. Through self-study he gained theoretical, technical knowledge while he gained direct training and experience working in industries such as the firm ‘Stork’.
He was member of a singing group, a debating society and a fencing club. Herman was in lodgings with a Mrs. Sauer and made regular payments to a washerwoman. Fares for travel to many towns in the region are shown; presumably for social and sporting activities; except the town of Enschede where he goes to a ‘factory’ several times a month. A daguerreotype photo – probably from this time – shows him (hatless) and friends with a tennis racket.
Herman received a monthly allowance of 70 Guilders (f70.-) augmented occasionally by wages. An aunt and a niece also gave him money. The allowance was paid by “W.” from Gorcum. This must be his brother Willem, nine years older than Herman and founder of the firm ‘de Vries Robbé & Co.’; steel fabricators. Whether Willem paid this personally or out of their parents’ estate is not shown. In July 1885 Herman moved to a better room. His allowance had increased to f 125.- a month.

In May 1886 Herman records the cost of a gift to his brother of portraits of their parents. As he recorded charges for hiring a piano, for tuning, and for binding sheet music (Schubert), it appears that he played piano. February 1888 saw the last entries in the cashbook.

After five years at Hengelo he went to Delft to attend the Polytechnic. Two years later he obtained the Diploma in Mechanical Engineering.

In 1890 (?) Herman went to Liverpool, England where he worked to gain further experience.

Anecdotal information has it that Herman returned from England with a wife and baby that were a complete surprise to his family and friends. The wife was Alice Joynson, a miller’s daughter from Wallasey at the mouth of the river Mersey. The first child was born in 1892 and was given the name Mabel Jeannette.


After his return to Holland Herman found a position in the sugar industry. In 1894 he joined what was then the biggest refinery; Spakler & Tetterode, where he worked for more then ten years. During this period a number of patents were registered in Herman’s name;
United States, 1898, ‘Continuous Centifugal Separators; 1901’Improvements for dissol-ving sugar and the like’.
Great Britain, 1897, ‘Improvements in con-tinuous centrifugal separators. 1900, Improvements for dissolving sugar and the like.’
Germany, 1897, ‘Zentrifuge fur Zucker und andere Stoffen. 1899, Auflosen von Zucker und andere Stoffen. 1902, ‘Zentrifuge fur beliebiges schleudergut’
To quote from one of the patents; “in the process of sugar refining large quantities of sugar have to be dissolved in hot water and as this has hitherto been generally carried out by manual labour not only is the method slow and discontinuous, but considerable expense on account of labour is involved; moreover as it is necessary with the dissolving pans now in use to heat the solution for a considerable time, the loss of heat is considerable and .... this long heating darkens the colour of the solution ..... the object of my invention is to provide apparatus for carrying out the dissolving process in an automatic and continuous manner, so dispensing almost entirely with manual labour, and effecting considerable economy.”

In the meantime Herman and Alice continued to have children; Margaret (known as Madge) in 1894, Alice 1898, Herman 1900 and Willem 1902. The last child, Frank, was born in 1907 “completing the half-dozen” as someone wrote on the photograph taken that day.


In 1905 Herman was appointed as joint-director of the Western Sugar Refinery Ltd. colloquially known as ‘de Wester’ (the Western). He managed and was directly responsible for the refinery and its personnel. Under his management the ‘Western’ grew to become a well known business making quality products. Some of the challenges he had to manage were general electrification, the introduction of high-pressure steam and superheating, difficulties resulting from the First World War, labour problems and expensive, poor quality fuel.

The Western Sugar Refinery came into being in 1882 largely as the result of amalgamation of many small refineries. By 1890 there were only three left in Amsterdam, and in 1918 WSR was the only one left. Its production was greater than all the formerly existing refineries put together. This consolidation process also took place nationally and in 1919 the Central Sugar Company was established of which WSR became part. Herman de Vries Robbé was the chief protagonist of this development and was appointed to the board of directors. He was also the promoter of the WSR Principle; which was to combine raw and white sugar factories with the refinery.


In the summer of 1906 the family stayed on a farm in the village Blaricum with the result that Herman and Alice bought a villa on the Eemnesserweg in 1908. He named it ‘Rozenhage’ (Rose hedge) after his parents’ house in Ede. Gradually they bought surrounding fields, tree lots and houses until they had assembled a country place with the main house on seven hectares. There were seven hectares more adjoining, acquired for privacy and to pproperty was developed according to landscape concepts harking back to the famous English landscaper ‘Capability’ Brown. Rozenhage had a network of curving paths opening new views as one walked. There was a kidney-shaped lake; the excavated material having been used to make a sizable hill. A path up and over the hill was great for bob-sleighing after good snow; with runs ending on the frozen lake.
s
pavilion known as ‘The Bungalow’. A large, framed landscape plan hung in the house at the stair half-landing. Every year the family spent
R
had a heart problem. According to Frank the Architect was Prof. Eschauzier.
Son Herman studied medicine and became a General Practitioner in Blaricum. Although Herman had other plans for his son Willem, he had to relent and let him afterwards pursuing his calling as composer with the support of his wife, Anna Bergmans, a school teacher. Frank – in an autobiographical essay – tells how his father tried him in several schools but eventually took him into the Westerse workshops where, for two years, he learnt practical and direct skills. These skills were enhanced by being sent to the United States for further training in car manufacturing plants. Over the years 1913 to 1933 the children married and were raising their own offspring, but Grootvader and Granny remained at the centre of the extended family. Visits and gatherings took place at Rozenhage and the verandah of ‘The Bungalow’ was used as a backdrop for photographs.

War and was a haven for war refugees. Herman and Alice took in a family of seven Belgian refugees and
th
remained afterwards with the de Vries Robbé family as housekeeper, com-panion and seamstress. She was known by all in the family simply – and with respect – as “Madame” and death after the Second Maria, was also a long-time was gardener and general e gardeners cottage beside the vegetable garden and the orchard across the road. Extra labour was used once a year when the beech forest was raked out. One of Herman’s peculiarities was that he never owned or drove a car. When he needed transport he got the local garage to sen
In 1930 Herman’s commemorated his twenDirector of the Weste
h
to use the correct appellation; or ‘Zonnewijzer’ in Dutch. This complicated device had been made by the staff in the refinery workshops. It consists of a kind of model of the solar-planetary system in the form of gilded brass hoops. In all there were one large and thirteen small sundials; although many of the small dials are merely decorative. This was supported on a bronze base and gunmetal bell. It was installed at Rozenhage on a granite pedestal, halfway between the lake and the house where grandchildren delighted in ringing the bell. Upon Alice’s death the Zonnewijzer was put on Herman and Alice’s grave. After some at the cemetery so it was removed and offered to shown great attachment to this magical device. Thank This 1933 photo shows Grootvader and Grannny at h
E
b
In 1934 Herman went – by himself – on a cruise to the West Indies. He records boarding ship in Amth
o
seen off by “Granny, Frank & Jane, Madame, Ellyn, Ingrid and Jaap.”
crew, passengers,
e
primitive sugar mill which he described with the aid of a sketch. There is an amazing use of English words seam-lessly interwoven with the Dutch.
fo
examination committee of the Public Business School. He was on the management committee of the Museum of Labour, which had been started by his friend and Blaricum neighbour, the artist Herman Heyenbrock. He was patron of The Western Music Band which achieved national renown. He served on the management committee for open air concerts in East Park and was member of the General Council of the Royal Association “Our Army”. In Blaricum he was Patron of and active in the Summer Festival; held in connection with the Queen’s birthday. As Chairman of the association ‘Gooische Grondeigendom” (Land Property in the region Het Gooi) he guarded property owners against the imposition of excessive costs of main
O
Blaricum which would have had a deleterious effect on the character of the Schapendrift (Sheeps’ Drove). Instead he organized the rehabilitation and extension of the old cemetery at his own cost and paid for its upkeep for five years. Needless to say, he was buried in this cemetery. In 1937, at the age of 74, Herman came down with paralysis of the right side after a stroke caused by arteriosclerosis. Soon after he passed away in Amsterdam. His funeral in Blaricum was well attended and reported. He was spared the war he knew was coming; but not Alice who s
y
a leader in industry, in his family and in the community.